Project of the Year Awards Entry

Located in the residential heart of North Fort Gary in Winnipeg Manitoba Canada, École Viscount Alexander (EVA) remains a vital French immersion school for approximately 295 students from Grade 5 thru 9 for the Pembina Trails School Division. The original school was constructed in 1948 with additions following in 1951, 1952, 1956 and 1959. The total area of the school stands at 43,380 ft² (4030 square meters). Various construction methods and finishes were used in the School’s original evolution ranging from double wythe concrete brick, concrete block, wood stud framing and cement stucco. In time the school’s building envelope reached a state where further repairs and maintenance could no longer be economically sustained. A decision was made to retrofit the envelope to a level that would extend the useful life of the facility for another 60 years. The principal goals and objectives for the Project then became clear for the Design Team. They were to develop and create a harmonious exterior building façade and thermally performing envelope that would unify EVA as one entity; edifying enrichment among students and staff, the public and surrounding community.

The construction of this Project was phased over three years to enable the continued operation of the School. There were 120,000 pieces of Summit 853 Andiron brick and 120 tons of Manitoba Tyndall Stone used and incorporated into the overall exterior veneer. The choice of brick and stone for the exterior veneer as well as increasing the thermal performance for this project embodies the Manitoba Government’s vision for developing an inventory of school buildings and structures that are durable, sustainable and have long term longevity. The overall design of the EVA’s envelope was guided by LEED™ principles. Of prime concern and challenge was increasing natural daylight together with increasing R-values. The design preserved the original brick structure where existing, while adding insulation to the exterior. Portions of the building were demolished where wood framed walls existed. Window openings were rebuilt at these locations. To address structural deficiencies in the existing exterior wall system, and to incorporate windows across 85% of the exterior classroom walls, 60% of the exterior wall system was removed and replaced. This was accomplished with shoring of the existing roof structure to allow the removal of the load bearing exterior wall system, and the incorporation of a manufactured wood beam and column system to support the masonry veneer over the openings as well as the roof loads. To assist in the longevity of the exterior wall assembly and allow for movement due to climatic conditions stainless steel masonry veneer ties were specified and utilized in the wall construction. 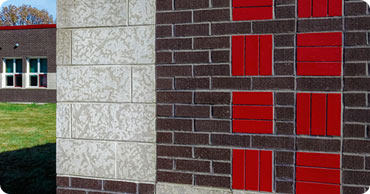 It is vital to recognize the effort and expertise of the masons that supplied and installed the chosen brick and stone for this project. Tony Bergagnini of Roma Masonry in association with Red Lake Construction Ltd., the general contractor, provided 40+ years of proven experience, advice and recommendations for the detailing, jointing, laying up and finished aesthetic of the masonry specified. As a family run business, Tony, together with his three sons and daughter is ensuring that the tradition of masonry work continues generationally. Through their attention to detail and unflinching dedication to the craft, École Viscount Alexander stands as an inspiration for the use of masonry in architecture for years to come.